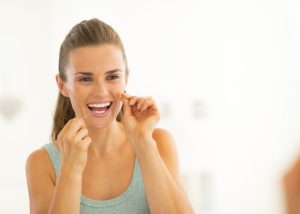 Many of our patients have read the most recent ground breaking report from the Associated Press (AP) stating that flossing has been removed from the Surgeon General’s five year Dietary Guidelines for Americans 2015 report. While we understand how this could be misleading, it’s important to note that dietary regulations are the goal of this report NOT oral hygiene guidelines. If you have questions about why we recommend daily flossing, keep reading, or ask one of our team members during your next six month checkup at McCarl Dental Group.

The Associated Press’s Take on the Surgeon General’s Recommendation

According to the AP, the removal of flossing from the surgeon general’s recommendations compounded by a lack of research that proves the efficacy of flossing means that we no longer need to floss. The article begins by explaining that the Surgeon General removed flossing from the 2015 guidelines, and that anything included in these guidelines is by law to be based on scientific evidence. They then recount the results of their request to the departments of Health and Human Services and Agriculture for evidence that flossing is effective according to the Freedom of Information Act. The results the AP received seem to indicate that there is not a scientific reason to floss every day. However, we’d like to have an opportunity to address our concerns with the AP’s logic.

The Flaws in Logic from the Dentist’s Perspective

From the perspective of the team at McCarl Dental Group, there are four main problems with the AP’s cited reasons for removing flossing from the Surgeon General’s report:

Contact Your Dentist in Greenbelt to Find Out More

Long story short, don’t believe everything you read on the internet, and remember, even articles that appear to be thoroughly researched can present these efforts in a misleading fashion. We hope all of our patients continue to brush and floss daily because we want each and every one of you to keep your smiles whole and healthy for a lifetime! Contact your dentist in Greenbelt to schedule a checkup today.

Comments Off on Don’t Stop Flossing Your Teeth!

Sorry, the comment form is closed at this time.